Augustine Girault, pseudonymously Anne Gaël. A painter, with her husband she moved in the Saint-Simonist and Fourierist circles in Angers. She was a militant feminist and republican, an advocate of popular education and animal rights. After an Algerian voyage, she made (published?) proposals for the improvement of the situation of the colonial settlers, a text which sheds a harsh light on the social attitudes towards prisoners and orphans that were prevalent at the time. 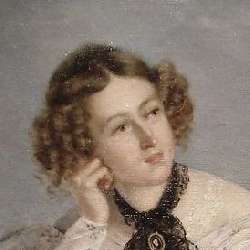