Kidnapped in Iraq on 5 January 2005, at the age of forty-four, and released one hundred and fifty-seven days later on 12 June 2005. A high-profile reporter for Libération at the time, specializing in conflict zones like Rwanda, Kosovo and Afghanistan, Aubenas was kidnapped from the University of Baghdad, where she was working on a story about refugees in Fallujah. 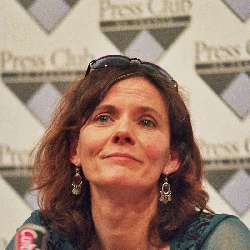