Married to an English officer who became governor of Tanganyika between 1921 and 1925, Anne Dundas acted as a kind of guarantor of the preservation of upper class codes within colonial society. Her work, published in 1924, clearly demonstrates this principle. Although she was no assiduous huntress, she considered herself to have complete license to put animals to death. 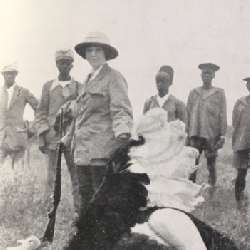